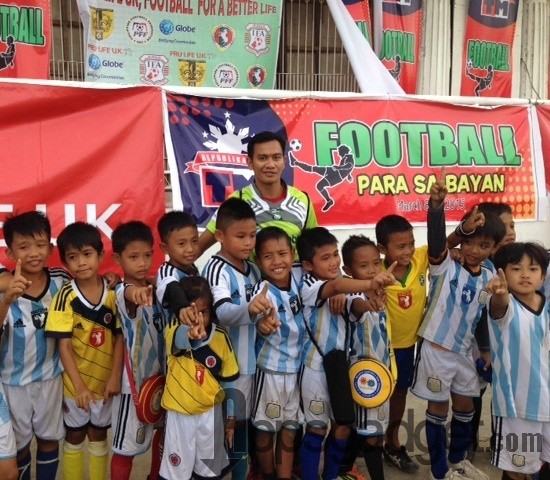 The said football festival attracted hundreds of youth from the townsfolk of Barotac Nuevo in the said city where Caligdong traces his roots, as well as from neighboring barangays. Aside from letting the football newbies aged 6 to 15 discover and enjoy the sport, the event also provided the opportunity to increase their level of play through a 7-side tournament format under the supervision of the former Philippine Azkals team captain and midfielder.

It also enabled the mass market prepaid brand TM to reach out to more of its publics in rolling out relevant programs, particularly the successful grassroots football program of Globe Telecom, which for three years now has largely helped underserved Filipino youth to tap their full potential and harness their skills, particularly through football.

“We are pleased that TM Football Para Sa Bayan is starting to positively impact the lives of Filipino youth nationwide, especially the underprivileged here in Iloilo. Bringing a wonderful head start to those who will be the future of this nation provides our brand a dimension of genuinely serving our countrymen even through sports,” said TM Portfolio and Brand Management Director Trina Sebastian.

“I am honored to work closely with TM Football Para sa Bayan, in so far as guiding our youth to discover their calling through a sport closest to my heart. It is with high hopes that by joining in the festivals and doing good in football, we would be able to encourage them to stay in school and have a better chance for a brighter future,” remarked Caligdong.

Between 2013 and 2014, the football festivals have made significant impact not only in promoting the sport but encouraging some 5,400 youth from the countryside to continue their education, with total of 40 communities committing to keep their local kids in school.

After Iloilo, the football festivals will soon make their way to more key cities in the Philippines in the following dates: April 22 to 23 in San Carlos, Negros Occidental; May 16 to 17 in Roxas City, Capiz; August 22 to 23 in Puerto Princesa, Palawan; and September 19 to 20 in Tagum, Davao del Norte.

One of the major legs of TM Football Para Sa Bayan, the football festivals will help address the concerns of the lack of opportunities for out-of-school youth while creating access to possible scholarships and integrate volunteerism in the local government units as well as in the corporate setting.