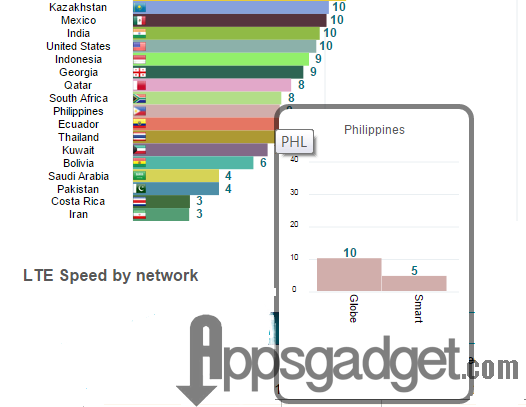 “These findings prove our success in continuously expanding our network capacities amid ever-increasing demand for high-speed mobile internet access as more and more of our customers build their life and work experiences around a digital lifestyle,” said Yoly Crisanto, Globe Senior Vice President for Corporate Communications, noting that about a third of the company’s 48.4 million mobile customers are now using smartphones.

As part of the company’s aggressive LTE rollout, the Globe network’s mobile ultra-broadband access in Visayas and Mindanao were expanded, utilizing the LTE-TDD and LTE-FDD technologies, Agustin said. Currently one of the most relevant mobile network technologies, 4G LTE offers much higher bandwidth, lower latency even as it increases overall network capacity. This allows customers to use more applications on their mobile devices.

Crisanto said the continuing expansion of Globe network capacities is intended to provide its customers with holistic digital experience as the company continues to offer products and services that enhance the Filipino digital lifestyle.

“Globe is committed in providing the right infrastructure support to ensure that the data needs of our customers are served, thus strengthening our position as the network of choice for smartphone users in the country. When it comes to mobile internet speed, we believe that the Philippines can compete globally but there is a need to distinguish between mobile and wireline,” she added.

The OpenSignal data is collected from real consumer smartphones and is recorded under conditions of normal usage. Rather than approximate the user experience, it is directly measured from the users of OpenSignal smartphone application, which can be freely downloaded on both iOS and Android devices, and thus it is able to constantly monitor the true network experience that users are getting on those devices.

Through the app, OpenSignal is able to observe the network exactly as the end user experiences it. Such customer-centric approach allows OpenSignal to measure the true end-to-end experience of the mobile network. It isolated the networks in the Philippines by extracting all those points sent with network IDs corresponding to the brands operational there and then perform a geographical query to isolate only those data points that have been captured within the region. The different brands have been identified by investigating the network names associated with the SIM in the reporting device and the network which is serving the device.

Rafa Nadal Tennis Clinic in the Philippines powered by Globe