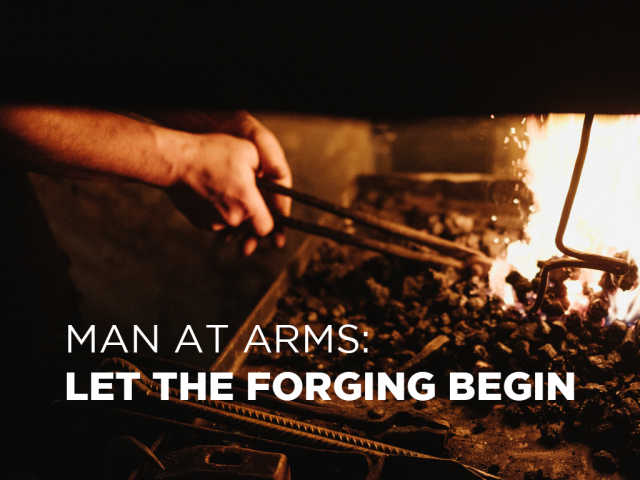 Before the introduction of firearms and explosives, our ancestors has lived their live using only steelworks that could help them preserve anything they held dear. Here in the Philippines, metal parts have always been an indispensable part of the community because of its sheer usefulness. Even during the times of our ancestors, they used metal for their bolo or itak which they used during times of conflict and violence. But, nowadays, with the introduction of guns, the world of steel and blades have slowly deteriorated to only remain as a thing of the past. Fortunately, there are still people that work passionately to keep the tradition of steel and blades alive through their blacksmithing shops around the world.

Over the last few years a web series entitled Man at Arms has taken the world by storm by producing weaponry the could only be seen in movies, tv shows, anime, and video game. They make our dreams come true by showing us the the fictional weapons that we’ve only dreamed of become reality in front of our eyes!

The first installment in the forging and blacksmithing web series, Man At Arms was hosted by a Hollywood blacksmith and Master Swordsmith. Every episode of Man At Arms was shot in a premiere smithing shop, The Sword and Stone in California. As a renowned Hollywood blacksmithing company, The Sword and Stone is a trusted quality maker of handcrafted, historically accurate pieces that are in accordance to the need of most creative directors.

As a youtube web series, Man At Arms has been in the game for numerous years, producing weapons that are only seen in movies, television shows, anime, and video games. The main difference between the props that The Sword and Stone make from the weapons that they make for Man At Arms, is that the weapons made for the latter is as deadly as they look! Also, to show the viewers that the weapons they make are indeed deadly, at the end of the video, they show snippets of where they use the weapon to destroy objects.

The first ever episode of the Man At Arms web series, it showcases how the team at The Sword and Stone create Jaime Lannister’s famous sword from Game of Thrones. They used common steel to make the blade of the sword. For the hilt of the sword, they did not miss out on any detail that can be seen in the show. For the guard, they inputted plating that brought in the details. Meanwhile, the pommel of the sword consists of double lion heads that signifies House Lannister’s symbol, which were also beautifully inputted by the people at the Sword and Stone.

At the middle of the web series, they succumbed to the demands of their fans and finally showcased Kirito’s elucidator from Sword Art Online. They made the sword using spring steel while adding in overlapping segments that acts as the guard of the sword. The finish of the sword is all black, including the hilt, and the inclusion of the minute details in the sword made it look like that it was really used by a real life Kirito.

For the second season of the web series, the crew has shifted from the Sword and Stone to another premiere blacksmithing shop known as Baltimore Knife and Swords. For the first few episodes of the web series, the people from Baltimore Knife and Swords distinguished themselves from the crew of the Sword and Stone. They created mashups of different weapons ranging from movies, tv shows, anime, and video games. With the end of the original Man at Arms, the youtube channel has garnered over 2.1 million subscribers while receiving an average of 1.2 million views per episode! Which is why the guys from Baltimore Knife and Swords has their hands full creating new and innovative content for their following.

This may be one of the most famous works that Man at Arms: Reforged showcased. This is a weapon that combines the intricacy of a lightsaber from Star Wars added with the elegance and danger of a traditional Japanese katana.

If you’ve watched this episode, you were surely amazed at how they created such a complex and intricately designed sword from Legend of Zelda: Majora’s Mask. They actually created two swords that overlap each other in a way that they form a loop in the middle of the blade!

Man At Arms On TV!

Along with the succes of both the Man at Arms original web series and its sequel, Man at Arms: Reforged, the guys from Baltimore Knife and Swords are coming to the television scene in the El Rey Network! The show will still be the same, but the addition of Danny Trejo as the host makes it totally more badass!

Be the first to comment on "Man At Arms: Let The Forging Begin"