realme Philippines will be rolling out exciting online promos, sale events and even a music festival for its fans!

It’s all about realme and the squad this whole month of August as the lifestyle companion of the youth launches the realme Fan Fest. With all the fun activities, amazing promos and several prizes that realme Philippines has in store for its fans, August is going to be in bright yellow for the fastest-growing smartphone brand and the realme squad. 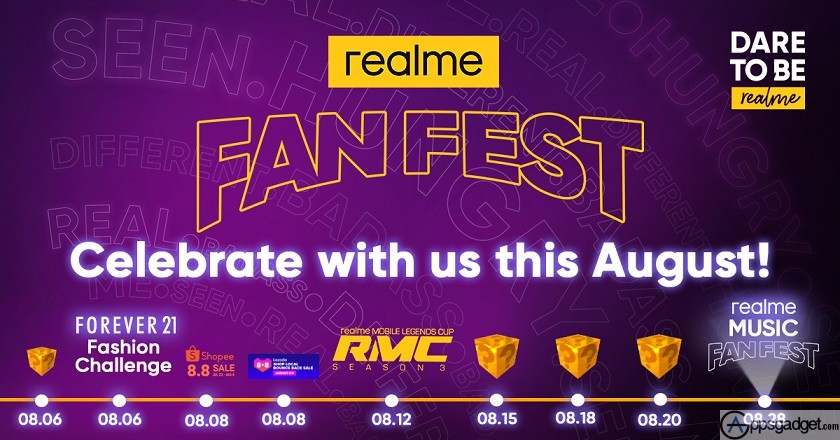 On the back of the successful launch of seven new smartphones and a stronger AIoT and accessory line-up in the first half of the year, realme Philippines is keen on expressing its gratitude to its fans through a month-long series of festivities. realme Philippines also sees this as an opportunity to boost optimism and reinforce empowerment among its squad members amid the current quarantine protocols and social limitations.

“In just over a year and a half, realme Philippines was able to soar because of the overwhelming support it receives from the realme Squad. We are very grateful for the confidence our fans give our products. This fuels us to offer more devices that elevate the tech-lifestyle experience of Filipinos. As gratitude, we hope we get to spread joy this August through the realme Fan Fest!” shares realme Philippines VP for Marketing Austine Huang.

Among the main activities lined up in the realme Fan Fest are the Forever 21 Fashion Challenge, 8.8 online sale, realme Mobile Legends Cup Season 3, and the realme Music Fan Fest.

True to its commitment to being a trendsetter not just in terms of technology but also aesthetic, realme has maintained its core of contemporary design across all its products. Concretizing this further is its partnership with international street fashion giant Forever 21. From August 6 until August 26, fans can join the Forever 21 Fashion Challenge by showing off their fashion style in a TikTok transition video. Official entries must have the hashtags #realmeForever21 and #realFashion. A realme device and several F21 accessories would be given away during the announcement of winners on August 26.

On August 8, realme will be participating at the highly anticipated 8.8 sale events of online shopping apps Lazada and Shopee. Fans will be enjoying discounts as high as 30 percent and some other great deals on realme’s smartphone and AIoT lineups. This includes even the latest devices it has recently launched such as the flagship star-shooter realme X3 SuperZoom.

realme smartphones are among the most powerful in the mobile gaming market. Cementing its position in this industry is realme’s strong partnership with Mobile Legends developer Moonton. Capitalizing on this partnership and aiming to foster camaraderie among its gaming fans, realme will be officially launching the third season of its inter-community tournament, the realme Mobile Legends Cup, on August 12.

To cap off the month-long celebration with a bang, realme will be gathering top musical artists in the country in an online music party! The realme Music Fan Fest is a free virtual concert happening on August 28. More details about this will soon be announced.

It is truly a downpour of fun, excitement and camaraderie this August with all the activities lined up for realme Fans – but lots more are yet to be revealed. Maybe new tech-lifestyle partners? More online challenges and prizes? FOMO no more by staying updated on all things realme! Be sure to follow the official Facebook, Twitter and Instagram accounts of realme Philippines.