iPhone X users are facing issue in iOS 14/13 that they are not able to place the cursor exactly at some point or middle of the world. Earlier it was very convenient in iPhone, you have to just hold on the cursor and it will move according to you. But in the latest update of iOS 13, iPhone7/8 pieces of you see you in placing cursor in the middle of the word. 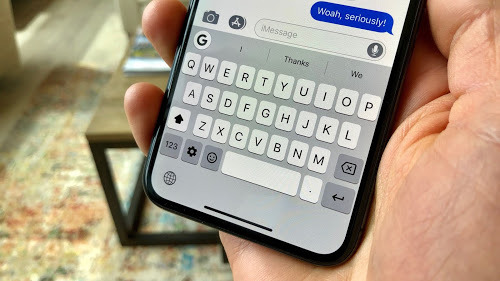 The issue is very frustrating as while typing something the word is highlighted by iPhone but you cannot edit it by placing the cursor at a particular position. And many iPhone and iPad users are not happy with iOS 13 changes with the cursor movement.

How cursor movement words in iOS 13:

New way to do it is to let the cursor know you want to edit mid word by placing your finger on the cursor and holding until you see the cursor grow to a larger size and then drag it to the mid word spot or wherever you want to place it and begin typing. But it is extremely dysfunctional and frustrating to use and seems to work different in every program as sometimes the whole word gets highlighted I have to delete the whole word or sometimes a whole phrase and retype to fix one letter.

If you don’t like the way iOS 13 is managing cursor I am facing difficulty in this, you should try below workaround and it should work for you.

So we recommend you to use space bar, just hold the and you will be able to move the cursor at any position in the word.

1.    Place your cursor at the beginning or end of your word.

2.   Hold and drag it into the middle of the word.