In iOS 14, widgets are really cool feature added which lets you customise your home screen which was lacking from past many iOS update in iPhone. Finally iPhone users are able to customise their iPhone home screen using Widgets in iOS 14.

To manage widgets , WidgetSmith is an application created by David smith and is quite usable. WidgetSmith offer a lot of widgets and you can manage all widgets in one place. Using WidgetSmith you can select a photo widget to show photo, or use weather widget to show  and many more widgets that you can imagine.

Great thing is you can now customise the Widgets as per your requirement including font colour, shape, size and how to display content in three different sizes.

Most commonly used WidgetSmith is Custom Photo Widget. Default Photo widget of iPhone do not let you to control which pics or album to show. But Widget Smith Custom Photo Widget Will allow you to select photos, select album, or show a photo. To add a photo in WidgetSmith , scroll down to custom section, there you can see to Widgets named Photo, Photos in album. The photo widget will show select images.

Read how to use WidgetSmith CustomPhoto Widget 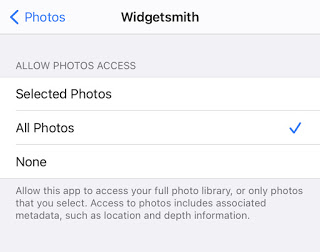 Many users while setting upPhotoWidget in WidgetSmith are ignoring access asked by WidgetSmith to Photo album and hence later Photo widget does not show any photo and shows blank grey box.

To Add permission Goto->Setting->General->Permissions->Photo-> Look for WidgetSmith and make sure you give full access to photos.

Fix 2: Save the widget after edit

After configuring Photo widget in WidgetSmith, please make sure to press save. Specially after changing the source album for the widget please ensure to tap on Save in WidgetSmith Widget configuration.

Fix 3: Remove and Add the widget to home screen

If you have made any changes to Widget in WidgetSmith, then there may be chances that Widget on the home screen will show. Please remove the Widget and re-add the same from WidgetMenu.

To add a Widget again follow the normal process , long press on the home screen until the Screen starts to jiggle, tap on plus icon on top left side of iPhone which will show a list of available Widgets, scroll down to find WidgetSmith.

if still does not works, Please try the steps to 2-3 times

Hopefully this article helps you to fix the issue WidgetSmith not showing photo. Please let us know in comments section.

Also a read for :

Be the first to comment on "Why Widget Smith Photo not working/showing blank grey?"