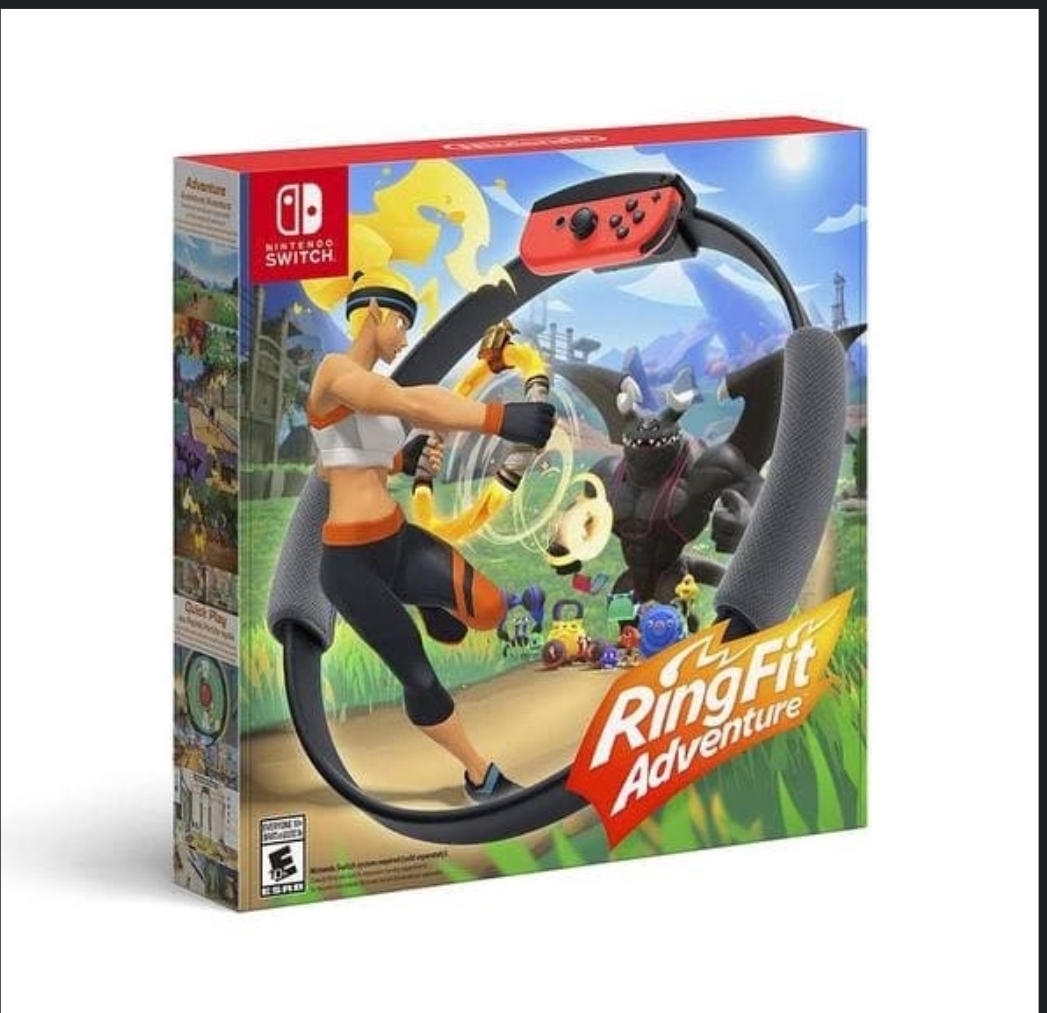 Tech the halls and treat yourself this holiday season with the top gaming gear with amazing deals at Shopee’s Gadget Zone! From PCs to console gaming, we’ve got you covered. Here’s your guide to kickstart or complete your own gaming setup.

The Nintendo Switch RingFit Adventure (₱10,995) is an adventure game that is also a workout! It comes with the new Ring-Con and Leg Strap accessories that give you control over in-game movements while you jog and sprint through dozens of levels. Using real-life exercise movements, you can explore a huge fantasy world and defeat enemies. You can also enjoy new features such as a new voice option and game mode that are included in the latest free update.

Shopee Tip: The Nintendo Switch RingFit Adventure is available at a discounted price of ₱4,799 this Tech Thursday at Shopee’s Gadget Zone!

Shopee Tip: The Nintendo Switch Pro Controller is offered at only ₱1,990 this Tech Thursday at Shopee’s Gadget Zone so make sure you don’t miss out on this huge discount!

The Logitech G402 Hyperion Fury (₱2,450) is a gaming mouse with sophisticated sensor technology for ultra-fast gaming. With 8 programmable buttons, you can customize it to fit your gaming style and its combination of lightweight materials and rubber grips gives you maximum comfort, allowing you to play as long as you want. Its extreme responsiveness and high-speed clicking gives you the advantage you need to take down your opponents and dominate your game.

Shopee Tip: The Logitech G402 Hyperion Fury is priced at only ₱1,199 this Tech Thursday only at Shopee’s Gadget Zone!

The GMS-WT-5 LED Mousepad (₱899) offers RGB magic blacklight with 14 kinds of adjustable modes and 2 levels of adjustable brightness that allows you to customize it according to your gaming setup needs. With its memory function, you can start gaming as soon as you turn it on as it saves your preferred brightness and mode even when you turn it off. Its weave cloth surface provides you with better control and makes it easy to clean. The anti-skid rubber bottom allows it to stay in place which makes it perfect for intense gaming sessions.

Shopee Tip: The GMS-WT-5 RGB Gaming Mousepad is available at only ₱266 this Tech Thursday at Shopee’s Gadget Zone!

The DualShock 4 Wireless Controller (₱820) isn’t only limited to PS4 users as it is also compatible with PC setups. With its revolutionary features like its touch pad, integrated light bar, and built-in speaker, this controller offers exciting ways to immerse yourself in your game. It also offers precision control and enhanced gaming feel with its shape and sensitivity, giving you absolute control while gaming.

Shopee Tip: The DualShock 4 Wireless Controller is priced at only ₱630 from its original price of ₱820 at Shopee’s Gadget Zone!

Get exclusive discounts and upsized deals every Thursday on the best Electronics on Shopee’s Gadget Zone. Browse from their wide selection of tech brands and make sure you don’t miss out on their deals that are up to 90% off on Shopee! 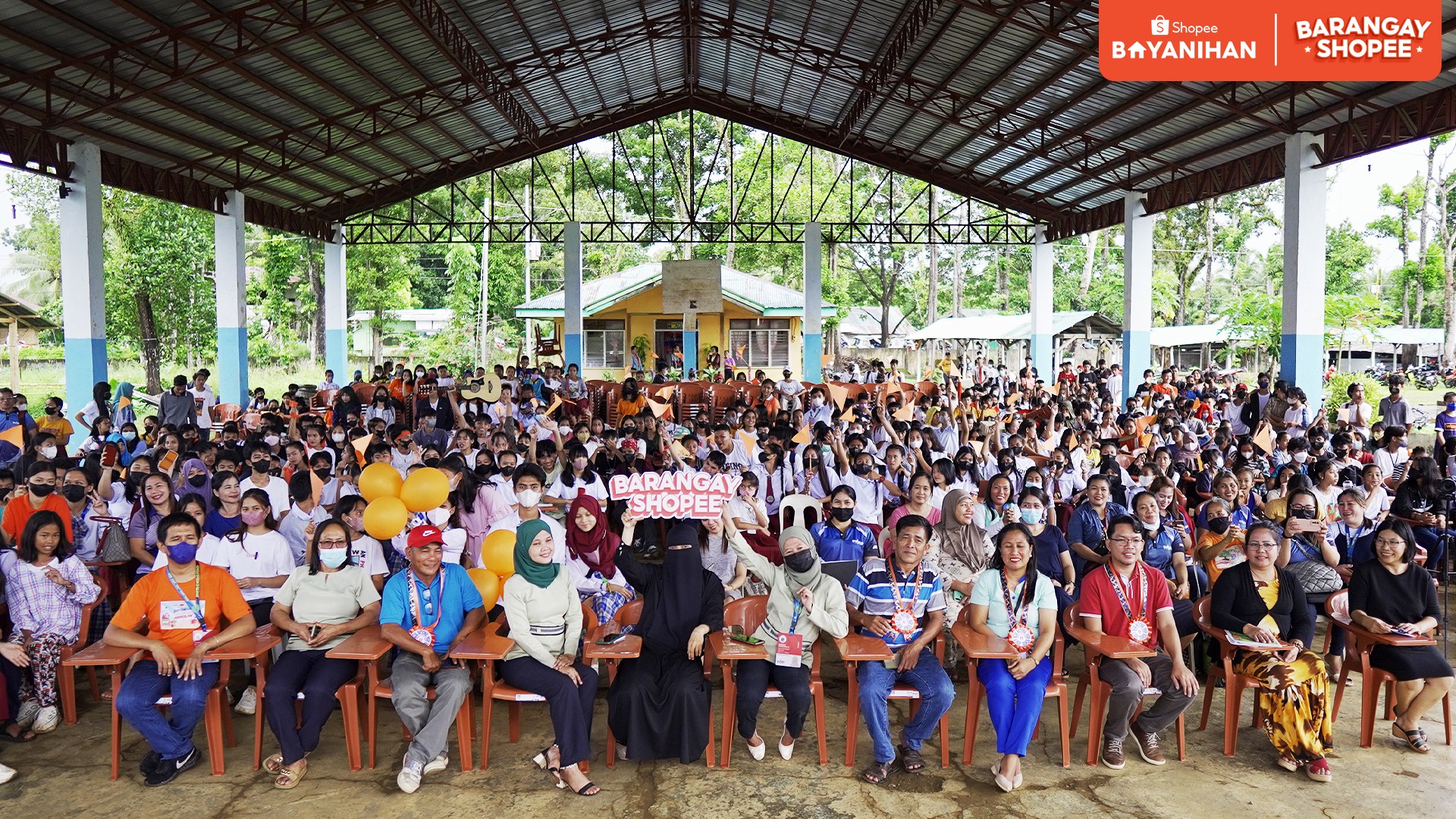 As face-to-face classes resume, schools all around the Philippines struggle with a shortage of resources due to the influx of enrollees. In Barangay Punta Baja, Rizal, Palawan, students faced the problem of not having enough chairs, as a lot of them had no choice but to sit on the floor during classes. Sitti Halima Adges, a school teacher at the Jose P. Rizal National High School, dreamt of providing her students with a complete set of school arm chairs to create spaces conducive for learning.

One day, Sitti chanced upon a post on Shopee’s Barangay Shopee initiative– where a barangay could win a community project of their choice. She and her fellow teachers took their chances and joined and thanks to their heartwarming video entry, Sitti’s dream became a reality. Out of 200 entries nationwide, Barangay Punta Baja was chosen as one of Barangay Shopee’s two winners.

On November 11, Shopee went to Rizal, Palawan to visit Sitti and her barangay, and donated more than 1,000 school chairs to the Jose P. Rizal National High School.

Sitti Adges submitted the winning video for the Barangay Shopee contest, and her wish was to provide all students of Jose P. Rizal National High School with new school chairs 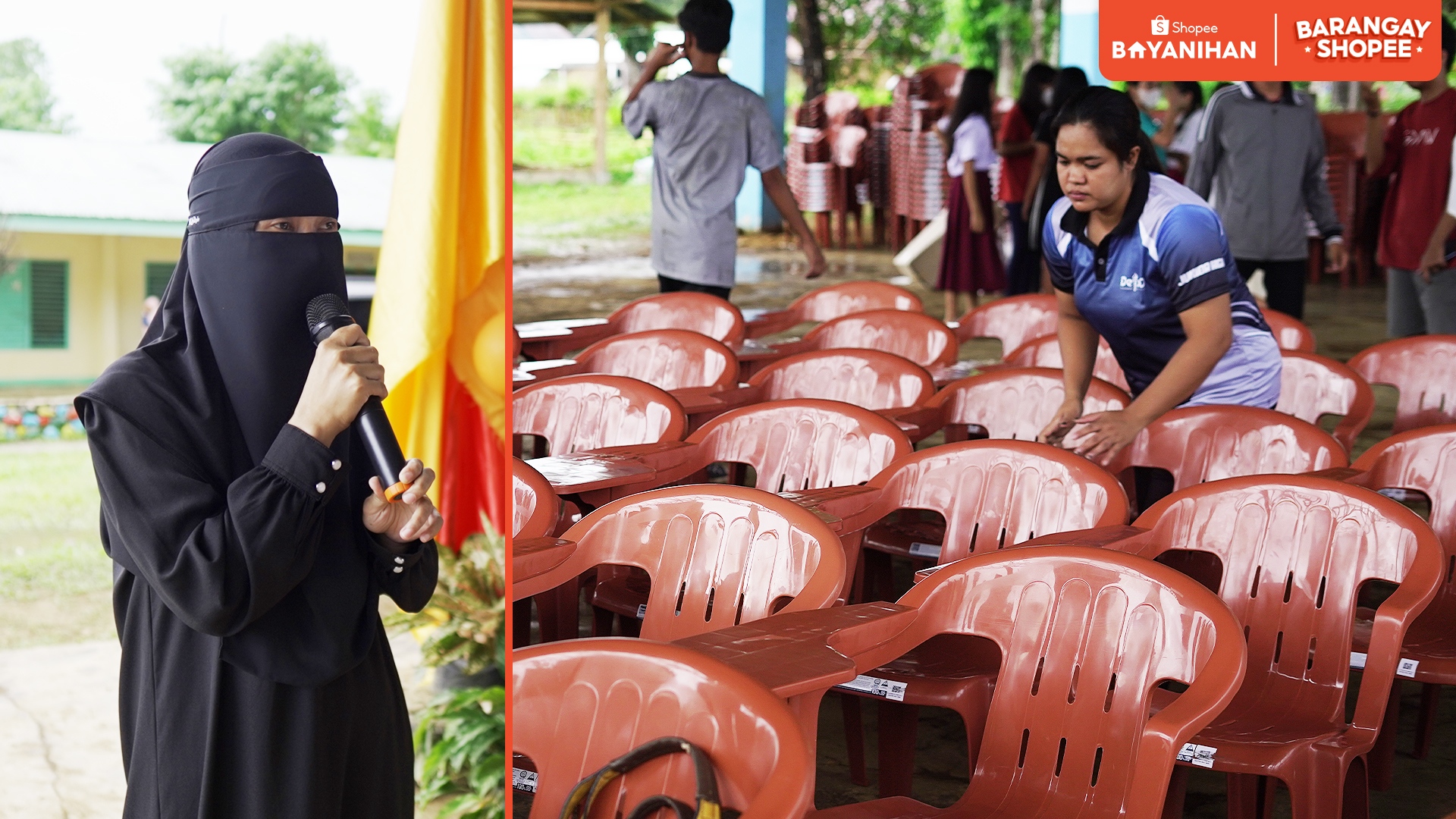 Martin Yu, Director at Shopee Philippines, shared “At Shopee, we are committed to serving the underserved and making a difference in communities all over the Philippines. When we launched Barangay Shopee, our goal was to address the direct needs of communities. Sitti’s video entry was one of the many we received, and it reminded us of our commitment to nurture young talent, and the importance of creating environments conducive for learning and growth. We are humbled that we were able to bring smiles to Barangay Punta Baja, and we hope to do the same for many more communities.” 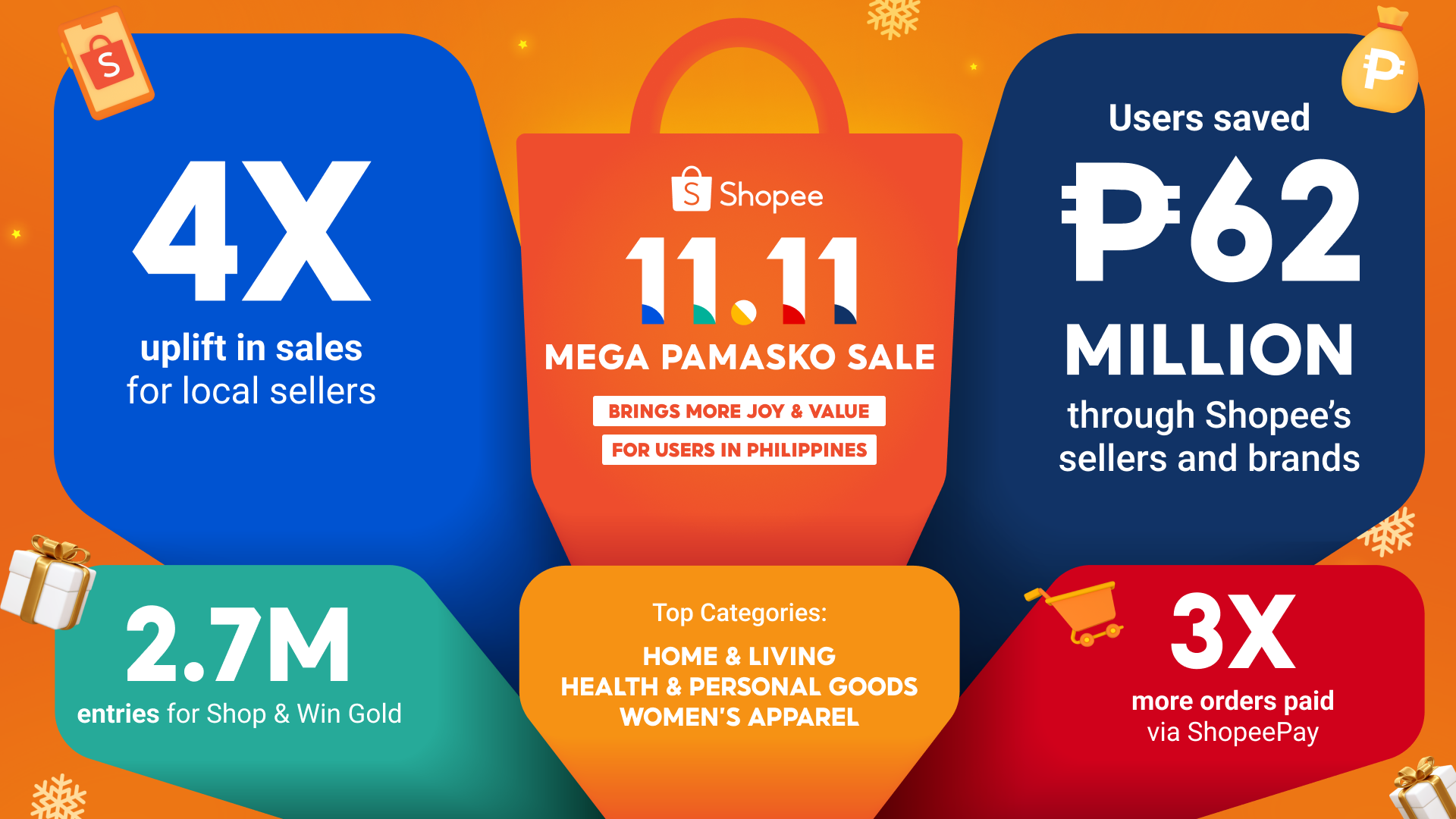 With mas mura deals and amazing prizes, Filipinos start preparing for the holidays and give local sellers a big boost in sales

Shopee recently concluded one of its biggest sales of the year, the 11.11 Mega Pamasko Sale, by giving users a rewarding shopping experience and providing a platform for success for businesses of all kinds. Local sellers experienced a 4 times uplift in sales versus a regular day, while shoppers enjoyed a total of ₱62 Million in savings on 11 November alone as they start their Christmas shopping.

Martin Yu, Director at Shopee Philippines shared, “Our aim is to give a sense of joy through Shopee – for shoppers to have the most rewarding shopping experience, and for businesses to find success on our platform. The goal is for more Filipinos to experience the convenience of e-commerce so sellers and brands can connect to them whether through mas mura deals, livestreams or our exciting new initiatives, such as Shop to Win Gold.”

Gold, A Year’s Worth of Groceries, and More at Shopee’s 11.11 Mega Pamasko Sale #Shopee #Sale 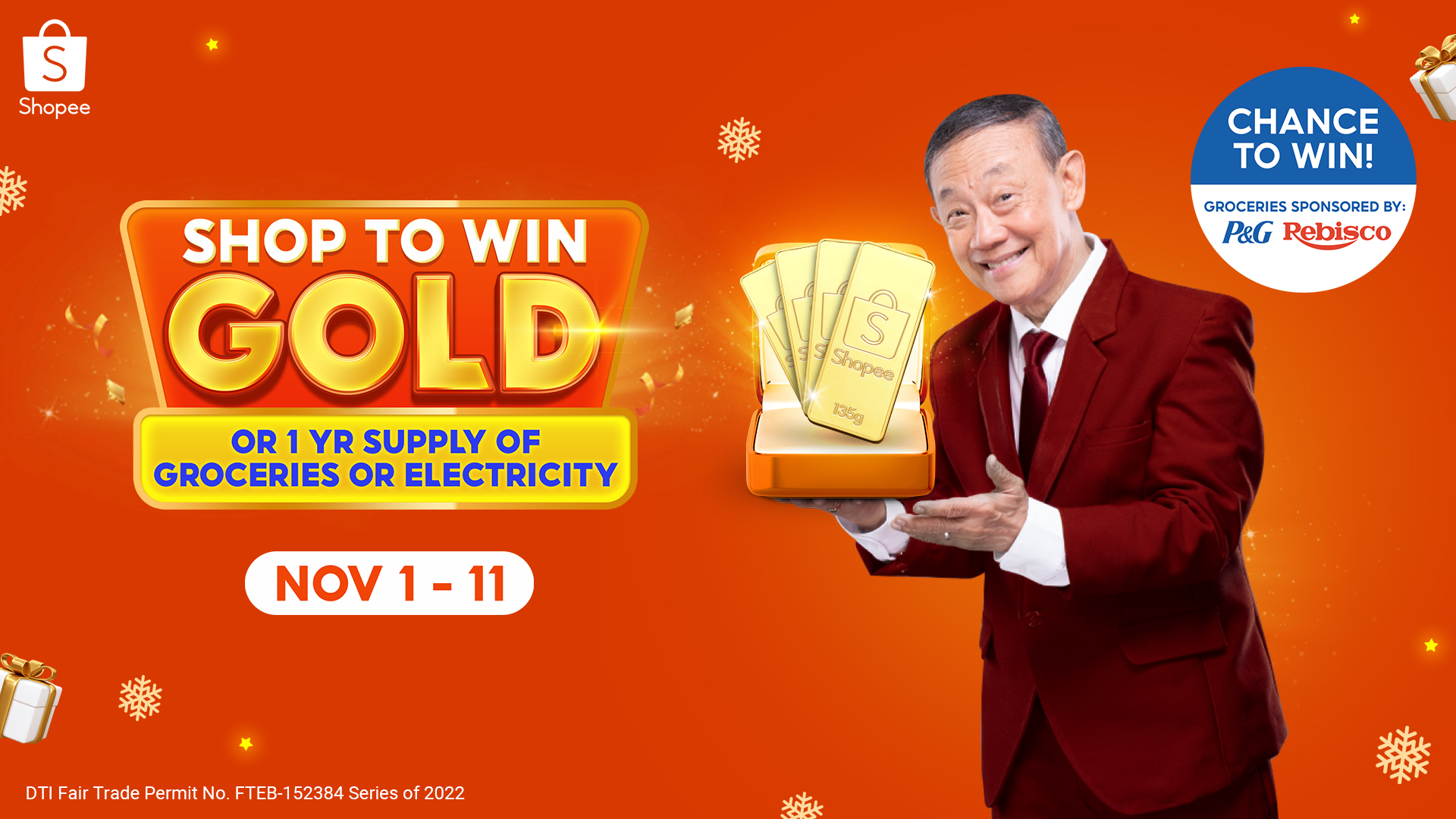 This 11.11 Mega Pamasko Sale, Shopee is offering all its users a chance to win gold, a year’s supply of groceries or essentials, and exclusive deals and discounts! Celebrate the most wonderful time of the year with these amazing offers:

It’s the season of giving, gathering, and golden days as Christmas fast approaches. As you look for the best gifts for your loved ones, Shopee is giving you the best holiday shopping experience with amazing prizes at the 11.11 Mega Pamasko Sale!

From today up to November 11, shoppers have the chance to take home a gold bar as the grand prize, or a year’s worth of groceries from Procter & Gamble and Rebisco, or subsidy for a year’s worth of electricity, and more. To join, just claim your Golden Ticket after every purchase and gain more chances of winning each time you shop on Shopee.

On November 12, stay tuned via Shopee Live to find out if you will be one of the 12 lucky winners to take home gold or a year-long supply of groceries or electricity! 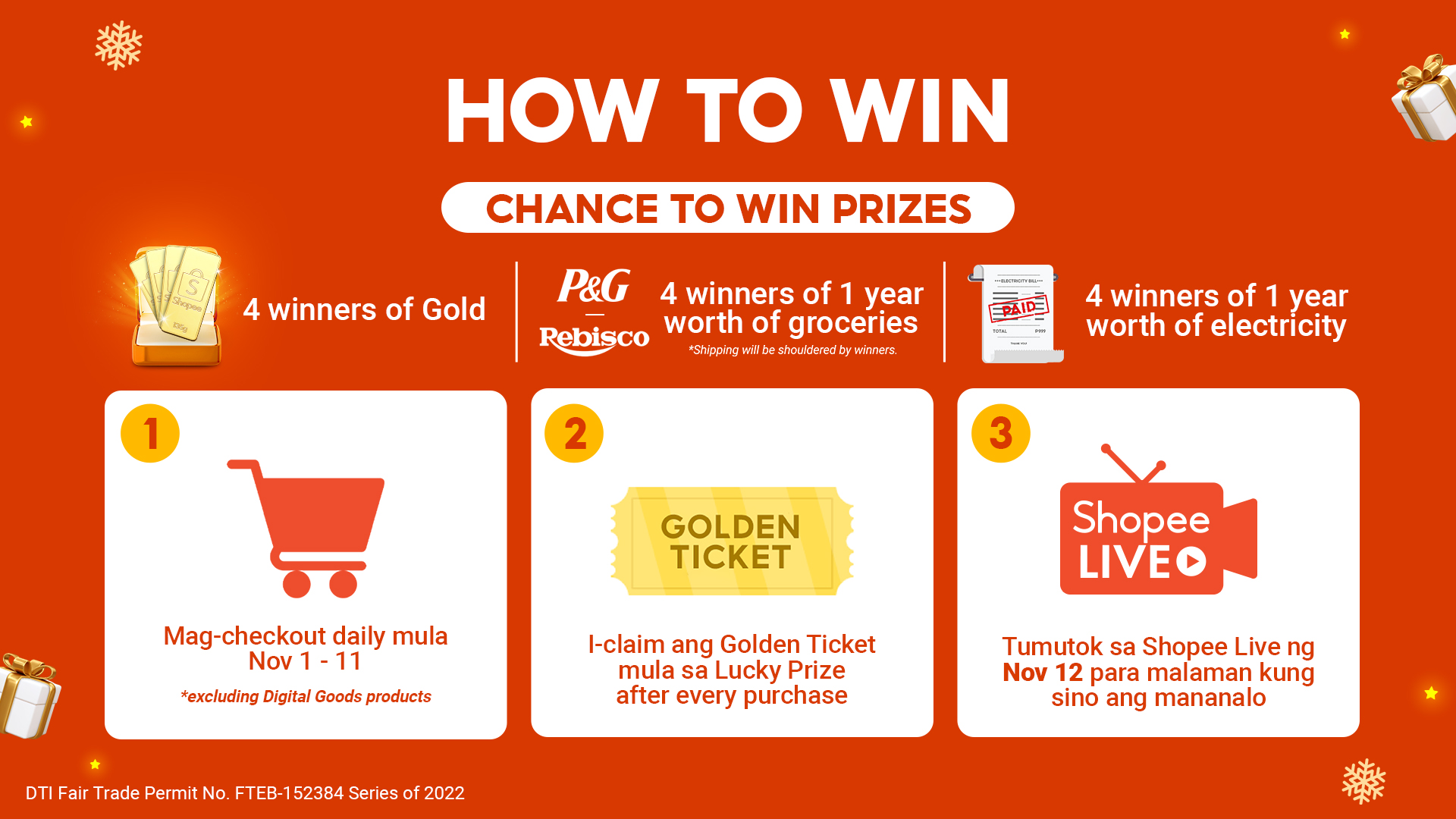 Shopee users can also get special discounts when they use our bank partners’ voucher codes from November 9 to 13. Qualified Credit, Debit and Prepaid cardholders (new and existing Shopee users) can save up to ₱2,000 with any of the voucher codes below to avail of their favorite items at mas mura deals.

More details can be found at the 11.11 Partner Promos page.

Go for gold this Christmas and experience holiday shopping like no other. Download the Shopee app from leading app stores and visit https://shopee.ph/m/win-gold for more details.