Leading digital solutions group Globe sustained revenue growth in the first quarter of the year on the back of easing pandemic restrictions, posting record-high consolidated revenues of P39.2 billion, higher than pre-pandemic levels.

Globe saw a 4% consolidated revenue growth at the close of March, a rise from P37.8 billion the same quarter last year amid gains from data-related products and services with sustained Internet use and improved mobility.

Globe’s gross service revenues were also higher by 3% than the fourth quarter of 2021. Total revenues across mobile, broadband, and corporate data accounted for 81% of total service revenues, up from 79% last year.

“We are pleased to report that our top-line growth momentum was sustained. We saw encouraging results, particularly in the mobile business, as pandemic restrictions eased and the economy opened up,” said Ernest Cu, Globe President and CEO.

As of end-March 2022, mobile business revenues comprised 69% of overall service revenues, improved by 2% from last year’s ₱26.3 billion, mostly from prepaid brands.  Mobile customers are now at 87.4 million, or 10% higher than the previous year.

However, the Home Broadband business showed a 4% year-on-year decline, although still better than pre-pandemic levels.  From the ₱7.4 billion generated as of end-March 2021, it went down slightly to ₱7.0 billion for the same period this year.

This was primarily due to the continued transition and migration of the broadband subscriber base to fiber, particularly those using Home Prepaid WiFi.  The decline in Fixed Wireless products fully offset the sustained growth from the fixed wired segment.

Total Home Broadband subscriber count now stands at 3.5 million, down by 15% year-on-year. As of end-March of 2022, Home Prepaid WiFi data traffic likewise decreased to 138 petabytes from 211 petabytes the year before.

On the other hand, Globe’s strong commitment to deliver fiber technology to more homes in the country resulted in an increase in fiber revenues and subscribers against last year by 165% and 155%, respectively. 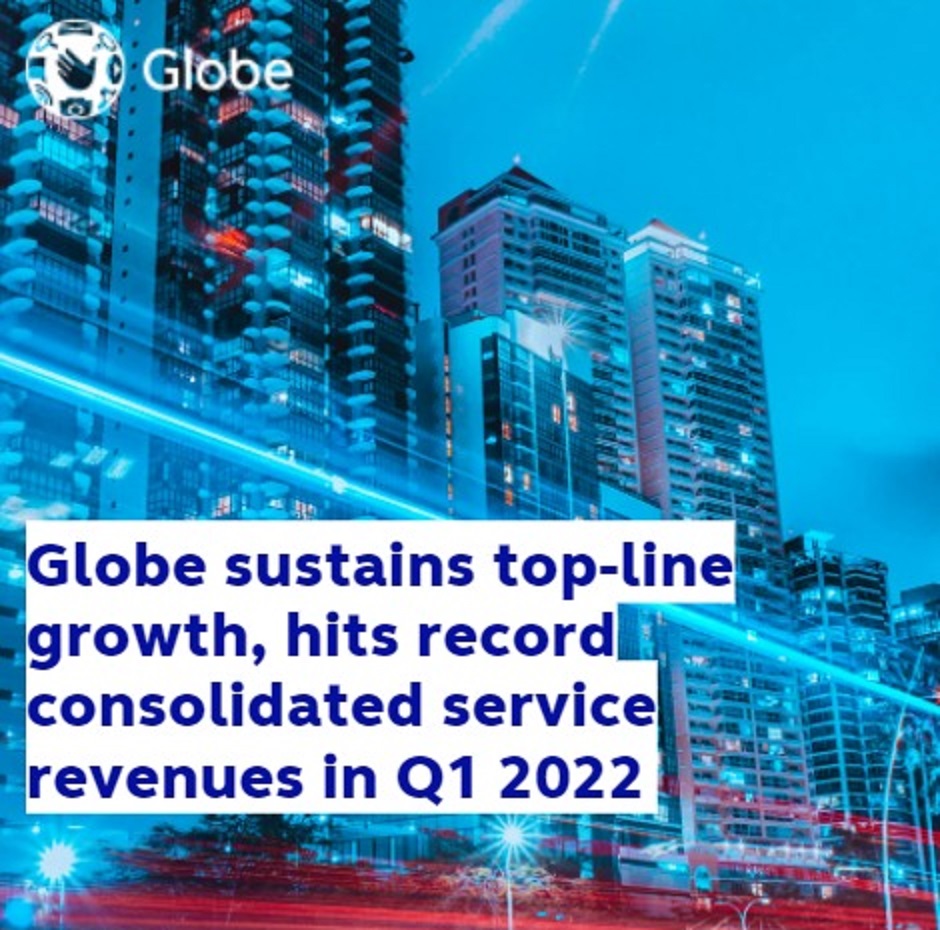 Meanwhile, Corporate Data revenues posted double-digit growth at 18% to reach an all-time high of ₱3.9 billion this period from ₱3.3 billion a year ago.  Its solid revenue performance was mainly driven by the growth of information and communication technology (ICT) businesses, particularly business application services and cloud solutions, and supported by the sustained growth of domestic services.

Consolidated Earnings Before Interest, Taxes, Depreciation and Amortization (EBITDA) for the first three months of the year stood at ₱19.7 billion, up 8% versus the same period of 2021 due to the 4% improvement in the topline and the relatively flat operating expenses and subsidy.

As a result, EBITDA margin for the period rose to 50% from last year’s 48%.  With higher EBITDA and lower non-operating expenses, which fully offset the increase in depreciation charges, net income reached an all-time high of ₱13.7 billion, or 86% higher than the ₱7.3 billion reported a year ago.

Lower non-operating expenses during this period were mainly due to the net gain of ₱8.5 billion on the partial sale of Globe’s data center business.  Excluding this one-time gain, normalized net income would have been ₱5.1 billion, or up by 2% year-on-year.

Globe’s balance sheet remained strong and geared comfortably within bank covenants despite increased debt from ₱210.1 billion as of end-March 2021 to ₱217.7 billion this year.