narzo, the newest game changer in the local smartphone market, starts September with a bang by reloading its much awaited narzo Stream Raids series and bringing back the lowest prices guaranteed offers in the narzo 9.9 sale.

“We are happy to announce that narzo recently hit our 20,000 Follower milestone on the official Facebook page. in celebration of the warm welcome We have received, We are gathering famous faces from the gaming industry for them to share their light to narzo fans,” says Allen Yin, Country Manager for narzo Philippines.

“As a young brand ourselves, We’re in full support of the up-and-coming local pool of talents, the Filipino dreamers and game changers out there who are trying to make it big in a highly competitive scene.”

Embrace the spotlight during the narzo Stream Raids

Calling all aspiring streamers and content creators! Gear up and get the chance to be raided during your live Stream on Facebook by top figures in the esports and gaming entertainment industry: Akosi Dogie, ChooxTV, Sh1n Boo, Manjean, OSX, Rob Luna, Xeaora, and more casters and gamers as a surprise to viewers.

the series of raids will happen on September 12 to 16, Monday to Friday at 6-8PM on Facebook. Filipino amateur streamers on the platform can enjoy a boost in viewership, interact with a wider audience alongside their idols, and be part of the fast-growing narzo community.

on top of that, lucky streamers also get the chance to receive Facebook Stars and win smartphone prizes from the narzo 50 series. Interested players can sign up until Sunday, September 11, using this link: 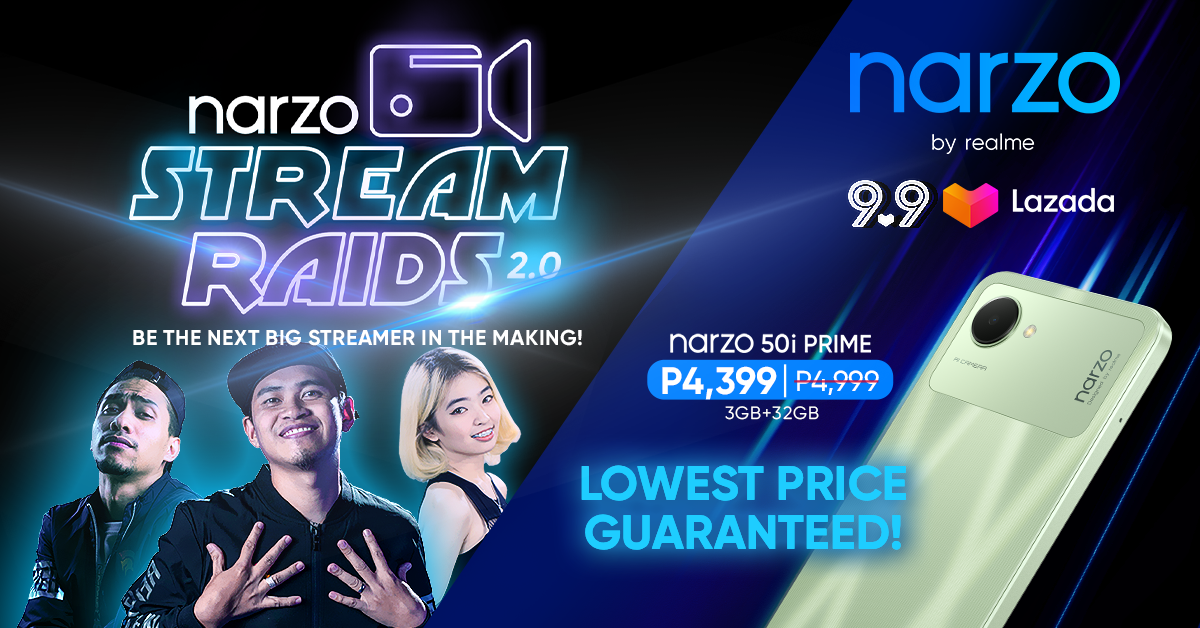 As part of its efforts to make quality technology more accessible for everyone, narzo is giving back to the gaming community by offering the lowest prices guaranteed at the 9.9 double digit sale on its Lazada flagship store.

from September 9 to 11, the best-selling narzo 50i Prime will again be available for only PHP 4,399, making it narzo’s most affordable model to date. the narzo 50i Prime has recently enjoyed sold out milestones during its initial selling in August.

Customers who add to cart the midranger narzo 5G series also get a free GOMO SIM card with No Expiry Data, available in limited quantities only.

for more information and latest updates on narzo Philippines, follow the brand’s official Facebook page and tune in to the daily live streams on TikTok. Join the twelve-thousand strong narzo Philippines online community to be a part of the real game changer!

Be the first to comment on "narzo PH Gives Local Fans a September Surprise!"