iPhone X and other iPhone 6/7/8 user are facing issue with iPhone alarm that alarm does not ring every time. The alarm issue in iPhone is not regular and happens randomly, making the reliability poor. This is apparently iOS 11 bug that mutes your iPhone timers. When iPhone miss an alarm  the screen will keep showing the alarm screen with the alarm info. Alarm is going off (visible on the screen) but no volume.The issue is even reported with iPhone X with iOS 11.2/iOS 11.3. 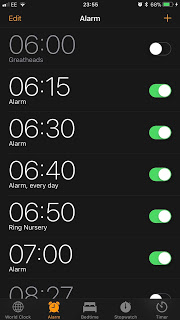 One reddit user reported as :
“Set an alarm to wake up at 4:00am for work and it didn’t actually ring until I was on break at 9:00.”
iPhone alarm doesn’t go off is not a new issue in the iPhone as the issue was also reported in the previous version of iOS 10. The alarm just misses to ring randomly in iPhone. In case you try to set multiple alarms in the iPhone, the first alarm usually works, but the second one fails randomly.
//pagead2.googlesyndication.com/pagead/js/adsbygoogle.js
(adsbygoogle = window.adsbygoogle || []).push({});
Users are missing important work, meeting or schedules due to this bug and seem to be severe bug in iPhone alarm system. It is quite sure that alarm ring randomly not goes off. That’s a huge problem that needs to be addressed from Apple. Restarting the iPhone can fix the issue but it is a temporary fix.

How to fix iPhone alarm doesn’t go off sometimes:

Fix 1: Don’t use silent mode
The problem is solved for many user making sure the phone is not switched to vibrate/silent mode, as this seems to cause ringer going silent randomly for alarm.
Fix 2: Change Sound settings
//pagead2.googlesyndication.com/pagead/js/adsbygoogle.js
(adsbygoogle = window.adsbygoogle || []).push({});
You may solve it by going to Settings-> Sound & Haptics and turning off “Change with Buttons” and setting the Ringer and Alerts volume to max.
Fix 3: Bedtime
The issue might have been caused by Bedtime and a regular alarm set at the same time. Please change that and see if it works