Many iPhone X and other iPhone8/7/6 users are facing issue after  updating their iPhone to iOS 11.3 that the iPhone  has been having the some audio playback issues that music stops and skips itself randomly. The issue was never observed with earlier version of iOS and surely iOS11.3 have caused music/audio playback glitch and skipping. One user reported the issue as
“After about 30 seconds, the audio cuts off in my iPhone 7, then comes back totally garbled. This has happened with music and podcasts, and it just happened while I was on the phone. 30 seconds into my call, the audio cut off, then came back slow and stuttering, eventually resolving itself.” 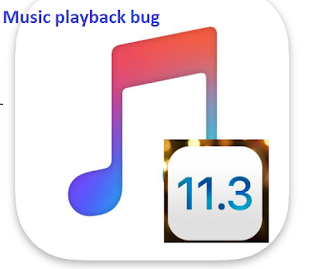 It not only one app that is affected but users are getting glitching with both music and podcasts playback and even for phone calls audio. This is strange that even on latest iPhone X and iPhone 8 when updated to iOS 11.3 and can hardly play ANY music without skipping, pausing, jittering, etc. The users never had these problems before the iOS11.3 update.  It is obviously a bug in the software update not a hardware fail as older model like iPhone 6s also skips music audio with iOS 11.3
There are some possible fix and workaround to fix iOS 11.3 music skips issue, as follows:
//pagead2.googlesyndication.com/pagead/js/adsbygoogle.js(adsbygoogle = window.adsbygoogle || []).push({});
Fix 1: Keep phone unlocked
Some users report that audio issue in iPhone happens to them after iphone locks itself. It seems to happen seconds after locking the iphone and unlocking improves it. So if this is the case you can consider increasing auto lock time periode if you are really looking to avoid this issue for some time duration. But remember this may cost you battery.
Fix 2: Turn off Personal Hotspot
//pagead2.googlesyndication.com/pagead/js/adsbygoogle.js (adsbygoogle = window.adsbygoogle || []).push({});
This seems to be working solution for many iPhone users as turning off the personal hotspot fixes the music playback issue in iOS 11.3.
Fix 3: Check your lightning cable
In case the issue is caused for you while using only connector, tThe problem can be the lightning>3.5mm jack adapter. Test with replacing it with a new one the issue should disappear.
Fix 4: iTunes restore
If none of above fixed the issue you should try to complete restore your iPhonevia iTunes and the jittering and skipping glitch issue should not occur again while listening to music or during a call.

Be the first to comment on "iOS 11.3 music playback skipping and jittering glitch [Fix]"