A large number of iPhone users are complaining about issue in audio after upgrade to iOS 11.4. The issue is that the music or the audio stutters, skips and sometimes freezes which is quite annoying in itself. The issue is also with saved songs in the iPhone and thus not a poor internet connection issue. The audio will keep sturring or skipping after installing iOS 11.4. The issue is even reported with latest iPhone X and iPhone 8/7/6 as well. 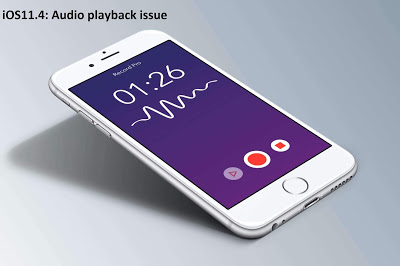 For some user the issue happens when the iPhone is locking itself or when lock it by user. During the lock, the music will stutter for a few seconds and then playback resumes normally. Audio stuttering happens on music, podcasts and Audible, so everything.
One user reported the issue on Apple forum as
“The issue was spotted via Spotify, playback would stop for a second, then restart – followed by glitching and skipping. It was intermittent but happened regularlyafter upgrading iphone 7 to iOS 11.4”
“I downloaded the 11.4 update…now my battery drains super-fast on iOS 11.4, my apps freeze, and the stuttering audio is STILL a chronic issue”
For many users who upgraded to iOS 11.4 this may seems to be a new issue but actually the same issue was reported with last two releases of iOS viz iOS 11.3 and iOS 11.3.1.
How to fix the audio issue in iOS 11.4 :
Apple have not responded to this officially and surely this is a bug that still persist in iOS 11.3 afte iOS 11.4. However there is a workaround/fix for audio skipping issue in iOS 11.4 which is likely the same as iOS 11.3. Please read the article here iOS 11.3 music playback skipping and jittering glitch [Fix]

Be the first to comment on "iPhone Audio music playback skipping / stuttering issue in iOS 11.4"