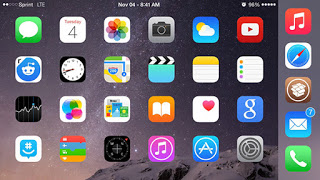 If you’re a fan of Five Icon Dock Modoki jailbreak tweak, then we’ve some good news.
A new jailbreak tweak called betterFiveIconDock has just been released which lets you add a fifth icon to the iPhone dock in iOS 8, and on iPhone 6 and iPhone 6 Plus.
The five icons in the dock looks great on the iPhone 6 Plus as the icons are well spaced out as you can see in the screenshot above, and doesn’t look cramped as on the iPhone 5/iPhone 5s (you can always fix that reducing the size of the icons). It also works well in the landscape mode on the iPhone 6 Plus.
Here’s how to get five icons in your iPhone dock:
As always, let us know how it goes in the comments.
If you haven’t jailbroken your iOS device on iOS 8 – iOS 8.1 yet, then head over to our jailbreak page for the link to our latest tutorial for the step-by-step instructions.

Be the first to comment on "betterFiveIconDock: New Jailbreak tweak lets you add a fifth icon to the iPhone dock in iOS 8 and iPhone 6/iPhone 6 Plus"