Google Launches Android Oreo Go Edition, OS Optimized for Devices that have Smaller RAM Capacity. Announced on Google I / O last May, finally Android Go has been completed. In Google’s blog today officially released Android Go based on Android Oreo 8.1. Android Go seems to be developed to replace the less successful Android One in the market. 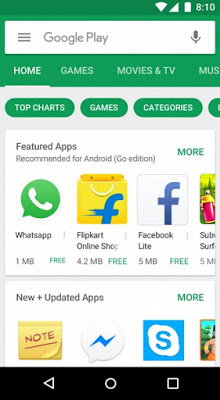 The last important part of Android Go is the Play Store. The Play Store specifically developed for Android Go will recommend any app that can run well on entry level devices. Other features of its Play Store also support Play Protect and the Find My Device security feature.

The Android Go launch today focuses on the country India is considered home to the next millions of Android users. In addition to the Android Go launch there are several launch apps with special features developed for India such as motorcycle / scooter mode on Google Maps.

Well, indirectly the culture and conditions in India are more or less the same as in Indonesia. Android Go will also be very useful in Indonesia. The launch is also to encourage developers to create applications that are optimized for entry-level devices.